7 Years as a Livestock Inspector

Today marks my seventh year working as a state livestock inspector.
Gosh it’s been fun. I can hardly believe they’ve let me stay at this job for this long.

I’m feeling all nostalgic so I thought I would share what I’ve been doing for seven years. seven years of don and doff…

that’s seven years I would do again.

Still can’t believe this job! If you are interested in becoming a state livestock inspector or the work we do, send me an email, I could talk about it for like, seven years.

How I Landed The Best Job Ever 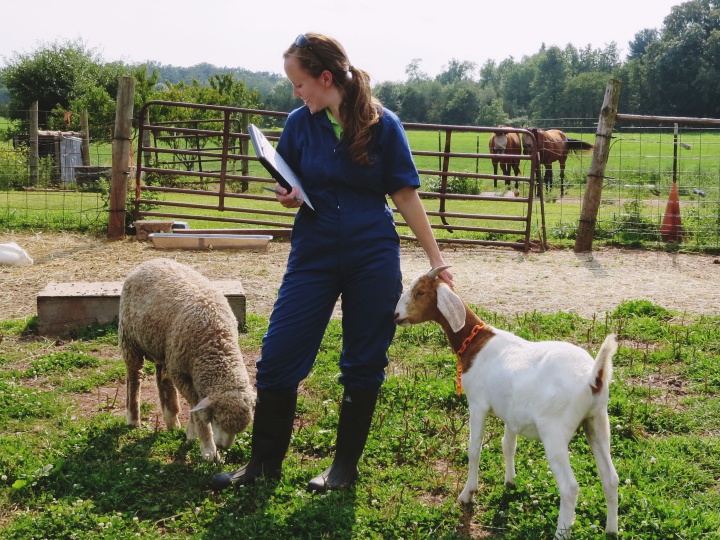 It was in a newspaper job listing, folded over and circled by my second boyfriend’s sweet mother.
She put it on the kitchen table and everyday for at least two weeks she asked if I had applied to that neat job in Maryland.

I did apply, at 11:52 PM the day of the application deadline. Applications were due at midnight. It took me so long because in the back of my mind I thought there is no way- they need someone way smarter than me.

A few weeks: a letter came with “Congratulations, you’ve been selected”.

I printed every USDA Factsheet I could find on CEM to figure out what the heck it was. Then, like a professional, I read them 15 minutes before my interview.

The truth is at that exact moment, I was a mess. My boyfriend had just broken up with me I was living in his Grandmother’s house working at a pet store and was miserable. I considered it rock bottom for my 23 year old self. I started questioning why the heck I majored in Dairy Science in college and what the heck I was going to do with my life. All of my dreams seemed a million miles away.
But because of that two important things happened:
I prayed a lot.
I decided to give my life to God instead of trying to figure it out on my own.

And because I gave my life over to God, I got over myself.

By getting over myself, I mean I stopped worrying, and I stopped putting my identity in my boyfriend or how poorly I did in college or wether or not I had a job and decided to just be happy and genuine, no matter what because really, one thing I was still sure of was God’s grace.

So the day of the interview I walked into the office with my USDA factsheets, some thoughts on why I’d be so perfect for the job even if I hardly passed college and I was so happy to be there. So happy. And for once I was completely myself.

Instead I said “Hi I’m Emily, I don’t know much about horses or contagious livestock diseases, but I REALLY want this job and my boyfriend just broke up with me so yeah, I have a ton of free time [Big smile].”

That was it really. That is how I landed the best job ever. I was honest and I smiled a bunch. When I asked my boss months later, she said “yeah, you seemed easy to get along with, that’s all we really cared about you know- you can teach someone the rest.”
Agricultural Inspector I, Maryland Department of Agriculture
Even five years later I can hardly believe I got the job.
So there you go. I landed the best job ever by the grace of God. Literally.

My boss taught me the second week of the job, always have dog treats.
Just keep them in your truck, she said.
I had met a gang of farm dogs already but not Sam. 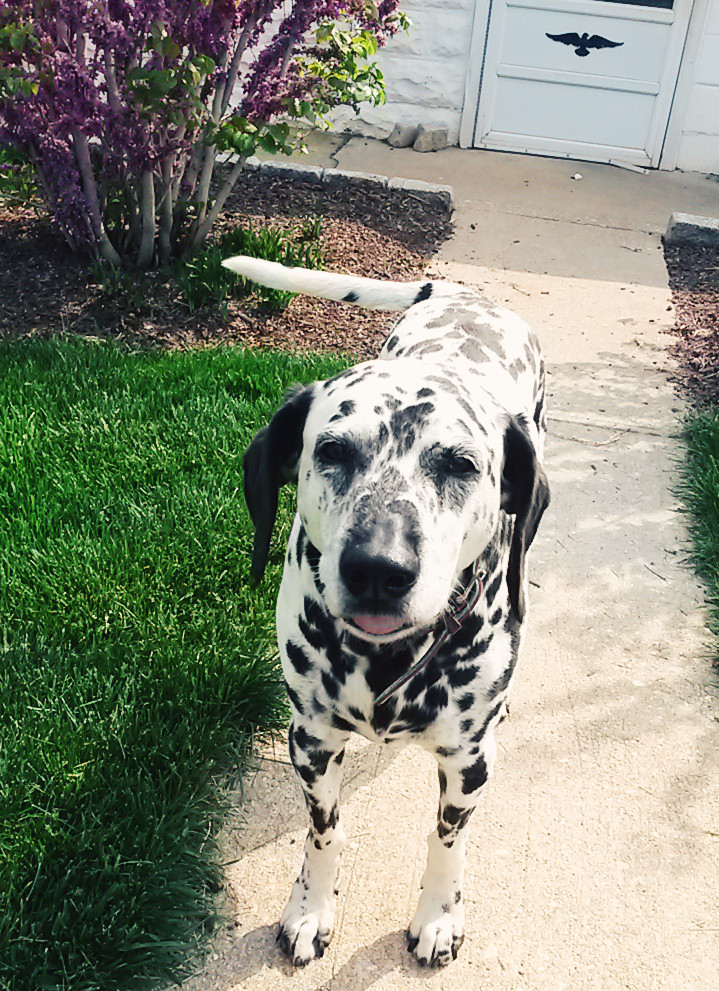 Sam was locked up the first time I went to her farm. The second time she bit me, on my jeans not my actual leg and not hard but yeah. I thought she was crazy. We developed a routine, twice a week she charged the truck, blocked the driveway, I waited, she let me drive by, I threw her a treat out the window way far in the grass, she left me alone. Except when I forgot treats.
The farm has three other dogs but every time I pulled up it was “where’s Sam, where’s Sam, crap”.

I secretly always wanted to pet her though, grumpy crazy dog. Then I did. Out of the blue, just the other day, I looked down and Sam was next to me wagging her tail waiting for me to pet her, like we’ve been friends all along, she just wanted the treats.

Four years worth of treats.
I told my boss all this and she said yeah, isn’t she cute.

Yes she is. Super cute.

Hello from this Border Leicester ewe at the MD Sheep and Wool Festival. She’s a pretty one. And the only one to stand still for the camera during her health inspection by state inspectors (after we scratched her head for at least ten minutes). 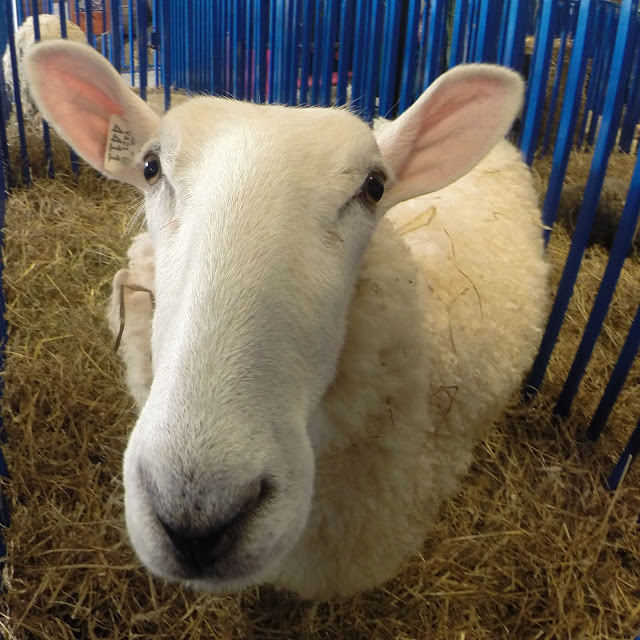 I think she was number three hundred and twenty nine that we counted. I just made that up but I remember what pen she was in so it might be close. Counting sheep never gets old.

If you’ve never been, check out the MD Sheep and Wool Festival. It is pretty special and it’s happens the first weekend in May every year.

Do ewe have any fun weekend plans? Could anything be funner than counting sheep? 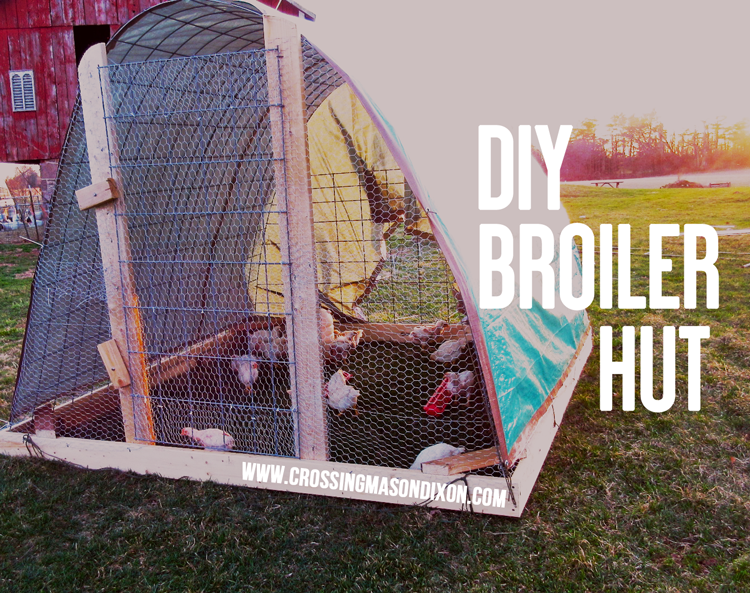 My wonderful husband made this hoop house for our broiler chickens over Easter weekend. The broiler chicks he wanted me to buy next year but I went ahead and bought this year. Without a place to put them.

The official plans can be found at “Making a Hoop Pen For Pasture Poultry” courtesy of the University of Kentucky. Of all the broiler house plans I’ve looked at (a bunch) this one is the best for price, portability, size and materials. This broiler hut can house about 50 broilers to market weight, cost us $90 to make and took less than 2 hours to pull together. Those University of Kentucky extension agents are smart people. 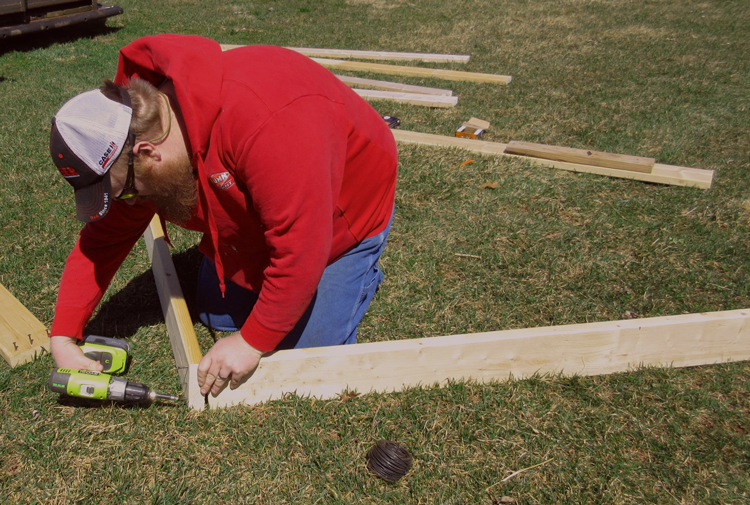 So is my husband, who hardly ever needs plans.

Step 1: Make the frame
The frame was easy enough, the only thing I would change is that we used 2x6s because we already had some. The plans call for 2x4s. I’m convinced the 2x6s make the whole thing just heavy enough that I can’t move it alone. It could by my imagination but yeah, pretend those are 2x4s in the picture. 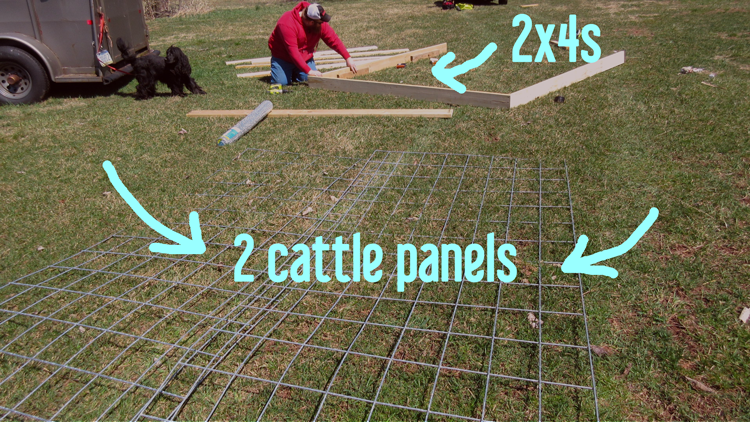 Step 2: Attach the panels
We bent the panels across the frame and nailed them in place with fence staples. The panels rest on wood cleats to make them stay in place, I wouldn’t have thought of that, Tom would have though. 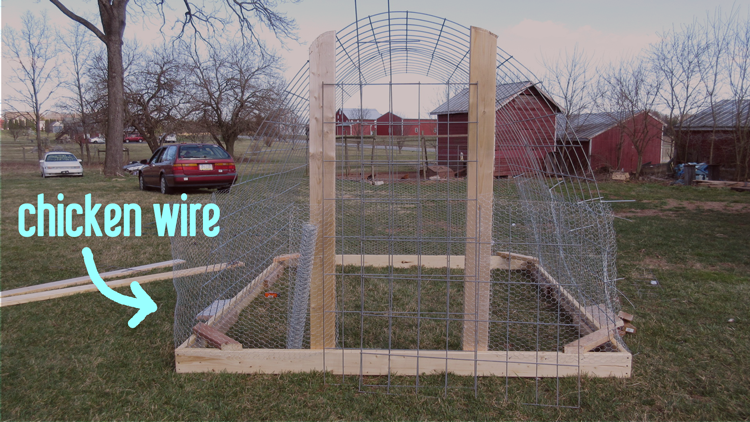 Step 4: Add chicken wire
We wrapped the panels with chicken wire to keep the chicks in. And attached it with zip ties, like professionals. 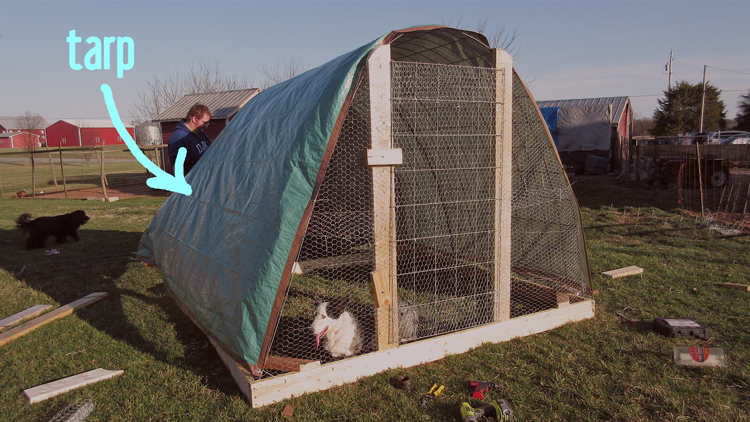 Step 5: Make a door
The door is just a cut livestock panel and hinged with long fence staples. My husband is a genius for thinking of that. The plans call for an actual door with door hinges- this door is way lighter.

Step 6: Add a tarp
The last step was to add a tarp (12×16′)  to act as a windbreak and keep out the rain. We tied it on with cord and we had a complete broiler hut.

Step 7: Put in the broilers 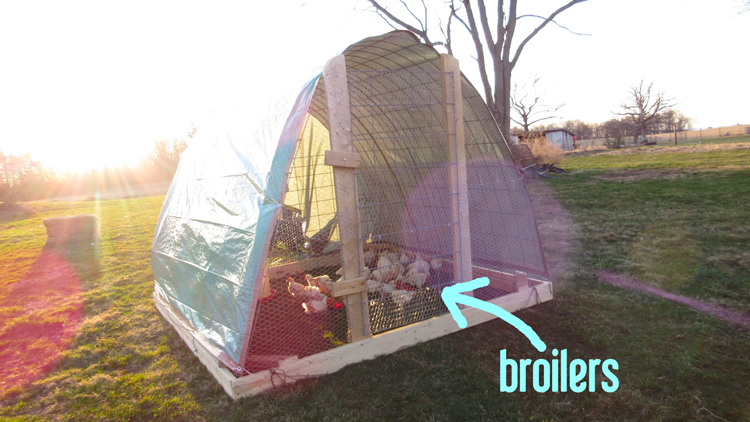 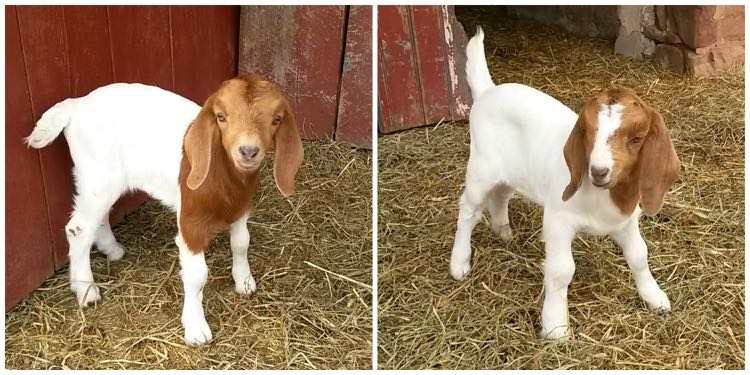 We have five baby goats at the farm right now. Five newborn baby goats and one miracle of a lamb. So far all the goat kids and the lamb have names (I think) except these two. Naming these two is my responsibility but I can’t think of anything. Since our goats are going to be used for weed control, I was dead set on naming all of them after brands of weed wackers (Husqvarna, Echo, Craftsman…) but weed wacker brands don’t translate to goat names all that well- at least what I’ve come up with. Plus the one on the right is a girl. The one on the left is a boy. Can you help us?

Thanks a million,
Emily & the goats