They say if you can make it through the first three months with a baby, you can make it. Do they say that? Or did I just make that up? Either way we made it because our baby was three and is now four months old. Phew. 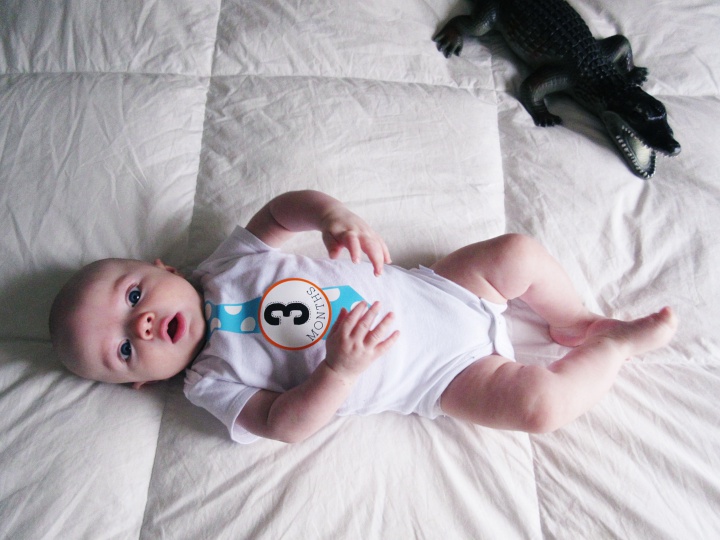 Don’t ask why there is an alligator on the bed but- perks of having a three month old- you get to play pranks on him. No seriously, Tommy’s face pretty much sums up our first three months with baby…
For the last three months, one re-occurring thought I had was this feels like war. The only opponent, lack of sleep. The only mission: keep baby alive. Make sure he is breathing, make sure he eats, make sure doesn’t pee all over the wall, make sure he has clean clothes….
You know the drill. I told my mom “it feels like war” and she just laughed. I told my sister and she said she didn’t remember it being THAT bad. I was starting to think I was crazy until a friend/coworker of mine (shout out Vivek!) who had a baby one month before us (well he didn’t but his wife did, shout out Gina!) messaged us to see how it was going. I said was “This feels like going to war!” His response? “It is war.”
Phew. All that to say we made it and Tommy is three (well actually four) months old and the first three months with baby? Well we wouldn’t trade it for anything.
Ps. I totally forgot that we had that alligator and I so wish I had it in his other two monthly pictures except we don’t live in Louisiana so maybe not.
Love from baby, Tom, Ally Gator and me!
-Emily Week One with Twins