By golly we grew a watermelon. Feeling accomplis

There was a rainbow today. A big one. I missed it

My babies in a box. Toms sister posted this pictur

You would have been two. Both of you. I asked your

Ira and Weeds are now SEVEN months old. I am okay.

Super proud of having tomatoes 🍅 this year. Esp

Last week. Me: man I am really tired Tommy: *runs

Tommy: mommy, you look like a ninja. Me: thanks bu

Tommy Taylor is six seven, ok now EIGHT weeks old and I am starting to forget the details of his birth. Can you believe it? Probably, because there’s a reason women can’t remember birth details and it has to do with having more babies. 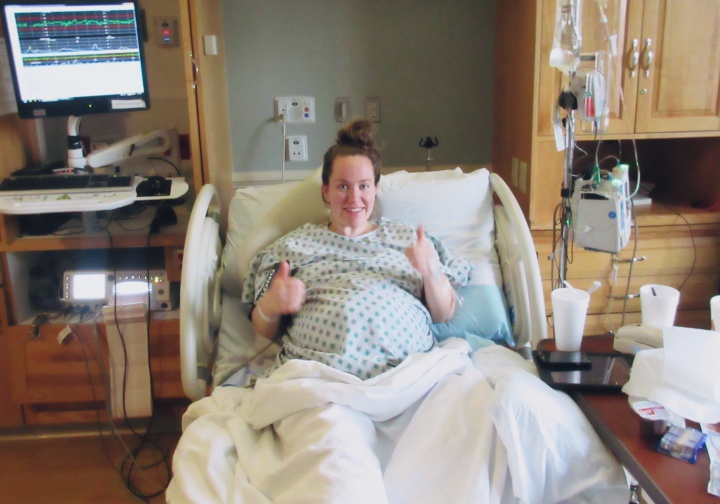 Keep reading if you are into birth stories, stop if you aren’t.

At 40 weeks and 3 days pregnant I walked into my doctors office and asked him WHEN was this baby coming? My due date had been March 10th. It was now March 13th. I can see now how impatient that makes me. But yeah, I was that impatient.

My doctor said how about March 16th. Then he explained that I would have to be induced. He said I would be fine, he said people get induced all the time. I cried in the elevator in his office. 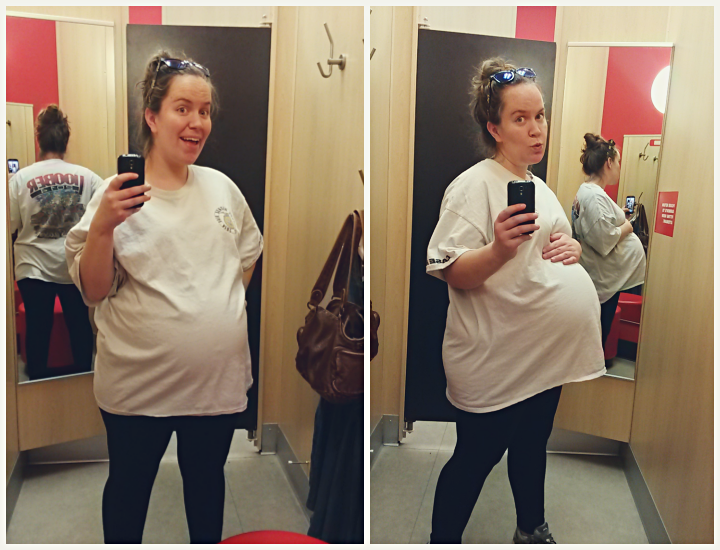 Two days later, on March 15th, I was THIS pregnant shopping at Target for last minute baby things.I thought if I walked for long enough I could get my water to break and not have to be induced. I’ll give you two guesses how that went.

We checked in for our 8:00 PM at exactly 7:56 PM and I was exactly 0 centimeters dilated.
Now, I don’t claim to be a labor and delivery expert but I thought I had a pretty good idea of what was about to happen. Let’s just say it’s way different when it’s you and every animal I have ever seen give birth handled their business like a champion compared to me. 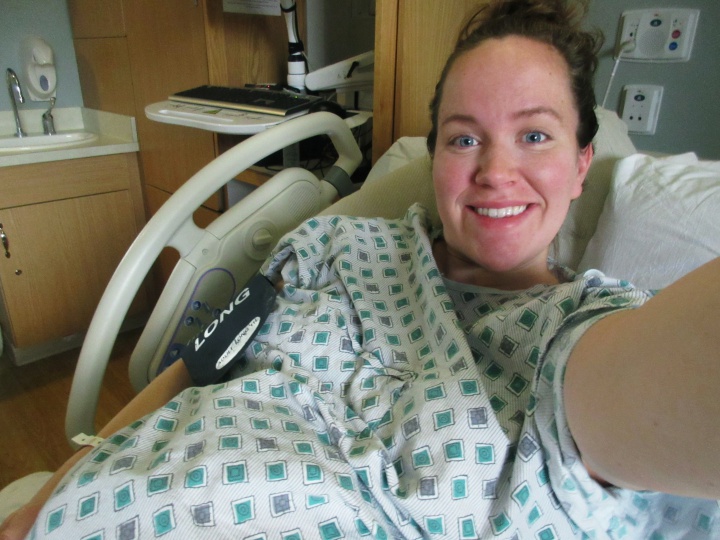 Seriously. Champions.
I had my cervix manually dilated with a foley bulb then tried to sleep but just watched the baby’s heart beat on the monitor all night long. Then it was 6:56 AM and I was 3 centimeters dilated and was ready to rock and roll.
I got some pitocin and started having contractions 5 minutes apart. 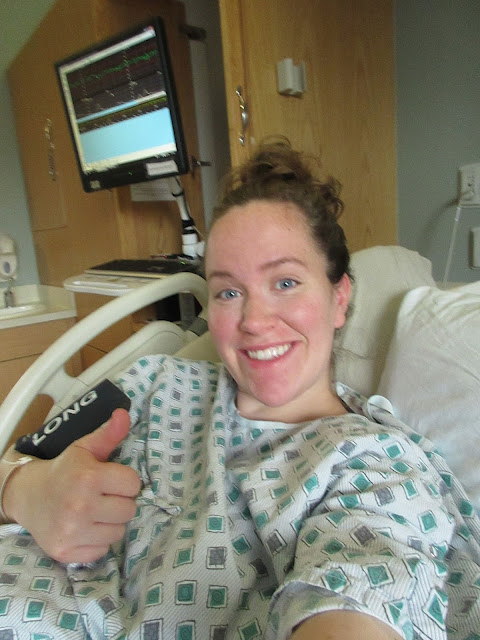 10:40 AM the doctor on call from my practice broke my water. The doctor’s exam was really rough, but otherwise I couldn’t feel anything, just a trickling down my leg. He said I was 4 centimeters dilated and that felt like a big deal. Tom was texting friends and family saying we were on the way to having a baby. I felt like I was rocking at this labor things, just cruising through contraction after contraction. I was smiling a lot and super polite to everyone.
The thumbs up ‘I’m in labor’ selfie seemed to be important so I took a lot of them.
Then BAM. 1:15 PM all of a sudden contractions were one minute apart and GOOD GRACIOUS they hurt. There was no rolling through anything. I wanted the epidural stat. Tom chose right then to get lunch probably because I told him he could….when he got back I just about ripped his hand off and asked where he had BEEN. I told Emily I thought I would need the epidural soon and then the next contraction I told her I no, I needed it NOW.  I was 4 centimeters dilated and asked Emily if I should wait to get it, she told me it was totally up to me.
The birth class we never took, yeah it seemed really important all of a sudden.
2:13 PM Still only 4 centimeters dilated,  I decided to go for it, the epidural was in in 7 minutes flat and I was on a cloud. Everything was good again. I was back to being polite and smiling. The epidural totally worked for me, but I kind of see why there is so much debate about getting one. Anyway, it was way WAY worth it for me. 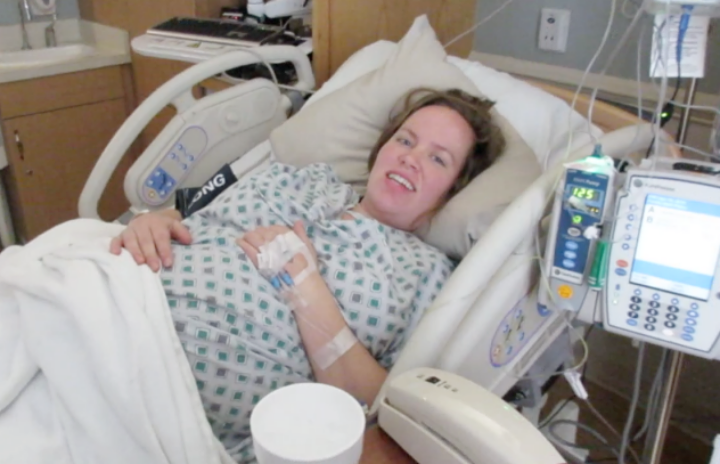 I stayed 4 centimeters dilated for seven hours. (Some people say epidurals slow down labor so maybe it was the epidural’s fault but who am I to judge)
Then my doctor came in and said I needed a c-section. That totally messed with my mind. I started thinking I wasn’t meant to deliver this baby. Tom and I started praying. 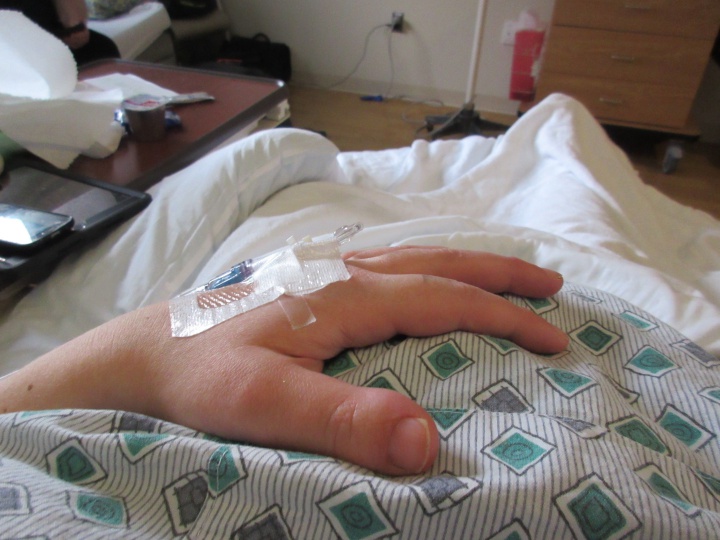 Almost immediately after we started praying I felt something change. Suddenly, there was so much pain that I couldn’t deal. I asked Emily (the nurse) if the epidural wore off. She told me no, the baby was just moving down. Well HELLO, I thought that was what the epidural was for.
Turns out an epidural was just for contractions, or something (I’m still confused)  but I know it hurt a ton. I asked Tom to put worship music on to help me focus of Jesus instead of all the pain. I wanted to start cursing the pain and Tom and everything and everyone but Tom kept reminding to call out to Jesus instead. I did. Jesus was all I was holding on to.
8:00 PM Boom. I was 8 centimeters dilated. It felt like a miracle because it was a miracle. God answers prayers and we had a whole lot of people praying for us. The doctor came in and basically said wow, I wasn’t sure your body was going to do it either but you got this now. You’re going to have a baby!
What happened next is a bit of blur. In my mind we changed rooms but in reality two hours passed and I felt like I had to push the whole time. Actually I felt like I had to poop the whole time. True story. Just keeping it real. That’s all I could fixate on, how much I had to poop. Apparently it was the urge to push but I was only 8 centimeters so it wasn’t time yet.
I now totally understand, a few things. One: it would be really hard if not impossible to deliver a baby on your own. Two: dads deserve just as much congratulations for surviving a baby’s birth as moms. Three: labor and delivery nurses probably don’t get paid enough. 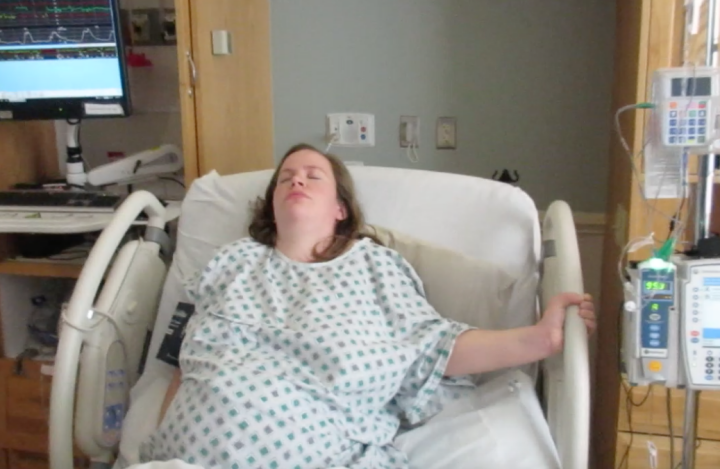 All that to say for two hours I completely and utterly lost my cool. Between screaming that I had to poop to breathing way too fast to almost twisting Tom’s fingers off, I was not keeping it together and I didn’t care what happened next as long as someone got that baby out of me and fast.
For two hours I screamed and for two hours Rhonda helped me breathe and kept me from pushing before it was time. She totally told me to got ahead and poop if I had to but that what I was feeling wasn’t poop it was the baby. I screamed that she was lying. Tom, well I’ve never seen that look on his face but he kept it together too and he was a rock. He tried to help me breathe but I wasn’t having it.
I love my husband though. At one point Rhonda told me the baby’s head was right there, that I was doing so good. I screamed that she was lying. Since I didn’t believe her, Rhonda told Tom look at the baby’s head coming. That is how I know my husband loves me, he looked because he knew I needed to hear it from him. His whole plan was to do whatever I needed but he didn’t want to see anything down there if he could help it. Sure enough Tommy’s head was right there.
10:00 PM, I’m not sure when my doctor came in or how long she had been there but we went from me yelling at everyone to her calmly telling me to push. I couldn’t believe it. I pushed and nothing happened. (So much for the baby just falling out at 37 weeks like I thought he might). I pushed and pushed and screamed and pushed. And then I was so exhausted that I started falling asleep. As I was pushing. I told myself I would go until 10:30 and then I would ask for a c-section.
10:34 PM They told me to push one more time. I said I couldn’t. I did it anyway.
WHOOSH it felt like something hard and followed by a whole bunch of jelly coming out and that was my baby. He came out screaming louder than I was.
Within minutes he was on my chest and I was in shock and in love. 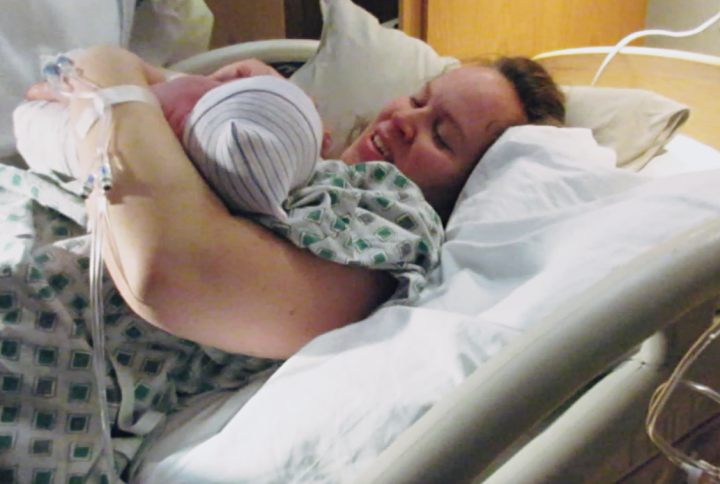 I never told anyone but I was nervous I wouldn’t love my baby right away, like he wouldn’t feel like mine but the love was instant and it was intense. There was no doubt that he was mine and my heart was so full. My heart has never been so full.
Thomas David Howard Taylor Jr. weighed 8 lbs 7 oz, and measured 21.5 inches long. And he was perfectly healthy. 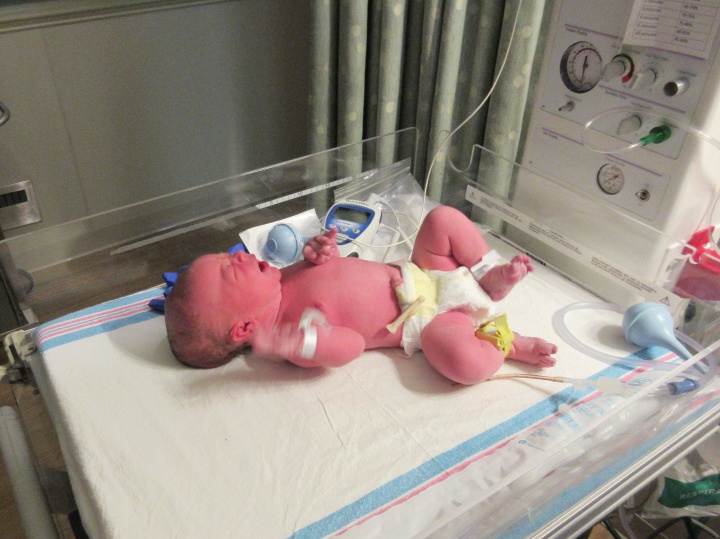 He was everything we had prayed for. 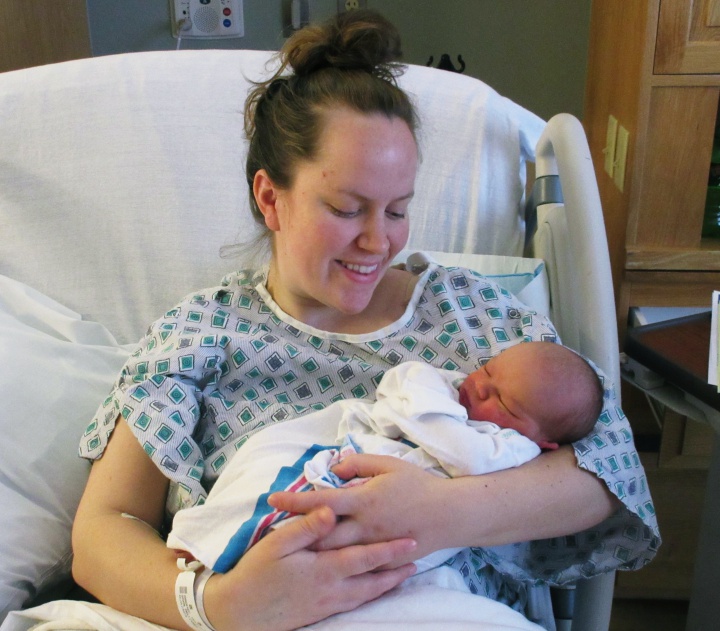 God knew exactly what was up when I got pregnant before I thought I was ready and He was in control the whole time. Each time I told Tom I was afraid of something: whether it was losing the baby, or the baby having the most recent genetic disease I googled and even in the midst of the hardest most painful part of labor Tom always reminded that God brings everything together for our good. Always, no matter what. (Romans 8:28) 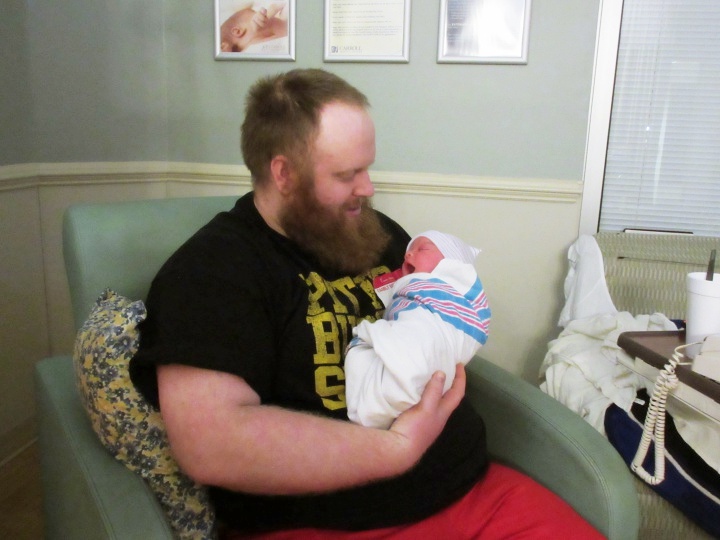 For his reminding me of God’s faithfulness and for a thousand other reasons I am glad we named this baby after my husband. I couldn’t have had a baby without him. I mean seriously he had a lot to do with it. 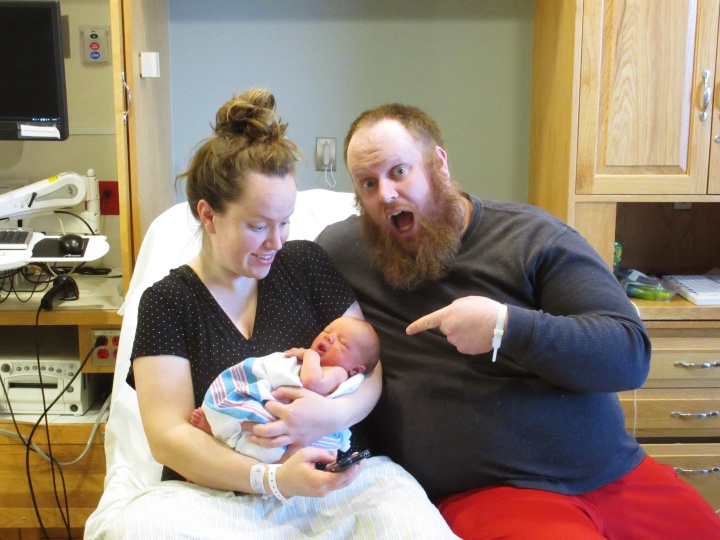 And that ladies and gentlemen is how we had a baby.
xoxo,
Emily